These docs include information about lockups in general, how they are implemented on NEAR, some challenges this causes, and how you can delegate your locked tokens.

A "lockup" is when tokens are prevented from being transferred. The configuration of this lockup may vary significantly from case to case, but the same smart contract is used for each of them. Accounts that are subject to a lockup have a different setup than accounts that are created without a lockup. If you have a locked-up account, it may be supported slightly differently by various tools (from wallets to delegation interfaces) because of this difference in the architecture.\ If you want to be sure to see the correct balances, use NEAR official wallet.

The most common configuration of lockup is to linearly release the tokens for transfer during the entire term of the lockup. For example, a 24-month linear lockup would make a small amount of tokens eligible for transfer with each block that passes until the full amount is free to transfer at the end of 24 months.

Another factor in lockups is the "cliff", which means that no tokens are unlocked until that date (often 12 months after the lockup start).\ On that date, a large chunk of tokens is unlocked at once to make it as if the cliff never existed at all.\ Most early accounts are subject to a cliff. For example, a 4-year linear lockup with a 1-year cliff will have the following characteristics:

See how NEAR tokens have been distributed and what lockups generally apply in this post.

See the FAQ at the end for questions

A Lockup is a special smart contract that ensures that the full, or the partial amount is not transferable until it is supposed to be.

The lockups are implemented as a separate smart contract from your main account. Thus, if you have received tokens prior to Phase II, you will get two things:

Vesting could be terminated by the foundation, an account configured at the moment of initializing the contract. It's important to understand how the termination works combining with the lockup schedule. 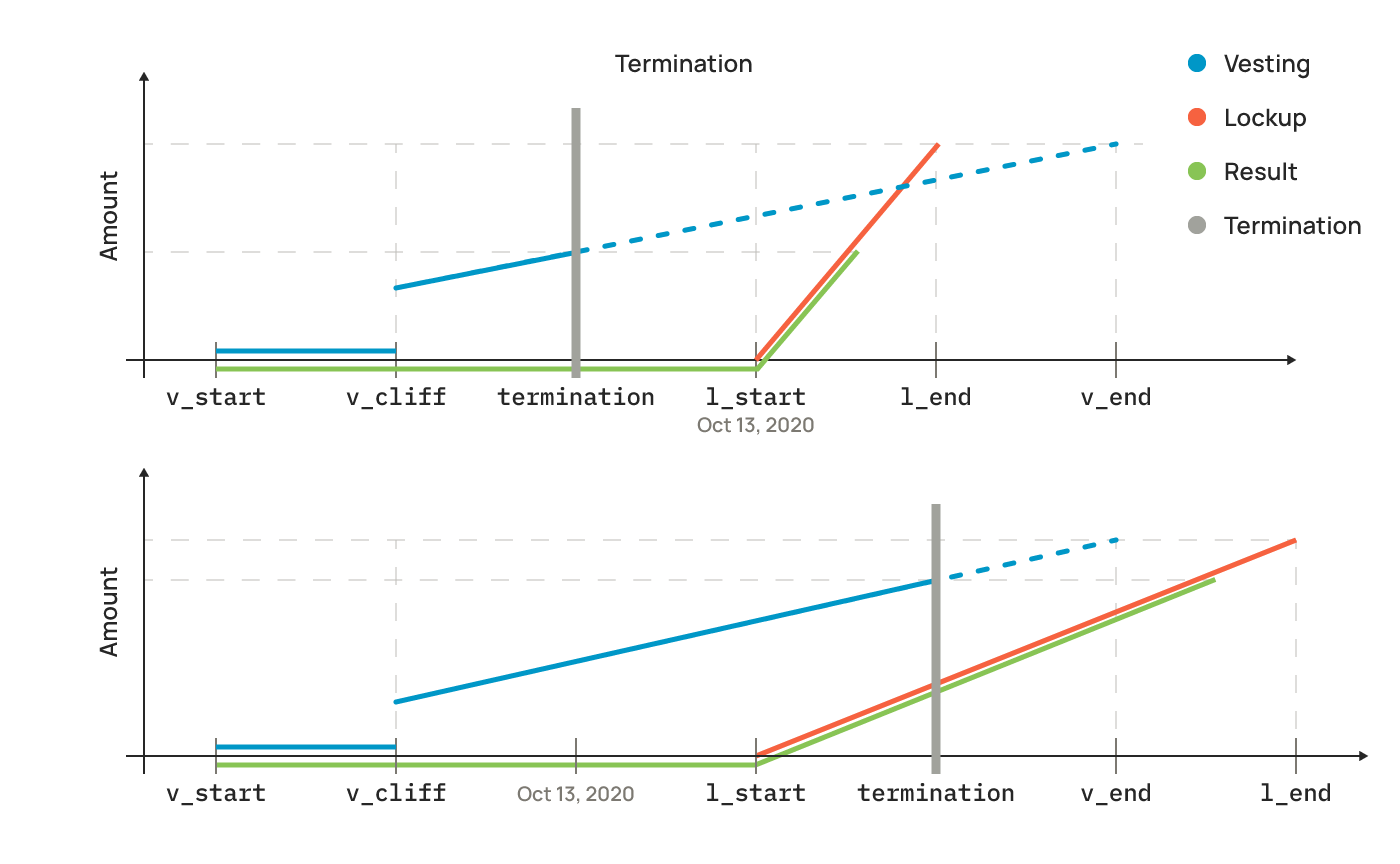 You can see examples of account and lockup setups in the NEAR Explorer.\ For example, this randomly chosen account gio3gio.near was created in several steps:

First, the Owner Account gio3gio.near was created and configured using several transactions, which you can see in the account history. It was created with 40 NEAR tokens to pay for the storage requirements of the account, and the two-factor authentication that is deployed to it.

Next, the account 9b84742f269952cea2877425b5e9d2e15cae8829.lockup.near was created to store the actual balance of locked tokens on the account in a batch transaction which also transferred these tokens to it (in this case, 594.11765 tokens).\ You can see the arguments for the new method in the explorer, which show a 12-month release duration with an initial cliff of October 4th:

For the actual lockup contract code and README, see it on Github.

One of the unique features of the NEAR lockups is the ability to delegate tokens while they are still locked.

There are a few things you need to know:

I don't see my full balance in my wallet​

Not all wallets support looking up the locked-up balance.

There are three ways to go:

If I have a lockup, what do I need to do to transfer my tokens once they are available from the Wallet?​

If you use NEAR Wallet, you can just transfer them as normal. You will just have to confirm a couple of extra transactions ("check vote" and "transfer").\ Other wallets may implement this differently.

Got a question? Ask it on StackOverflow!